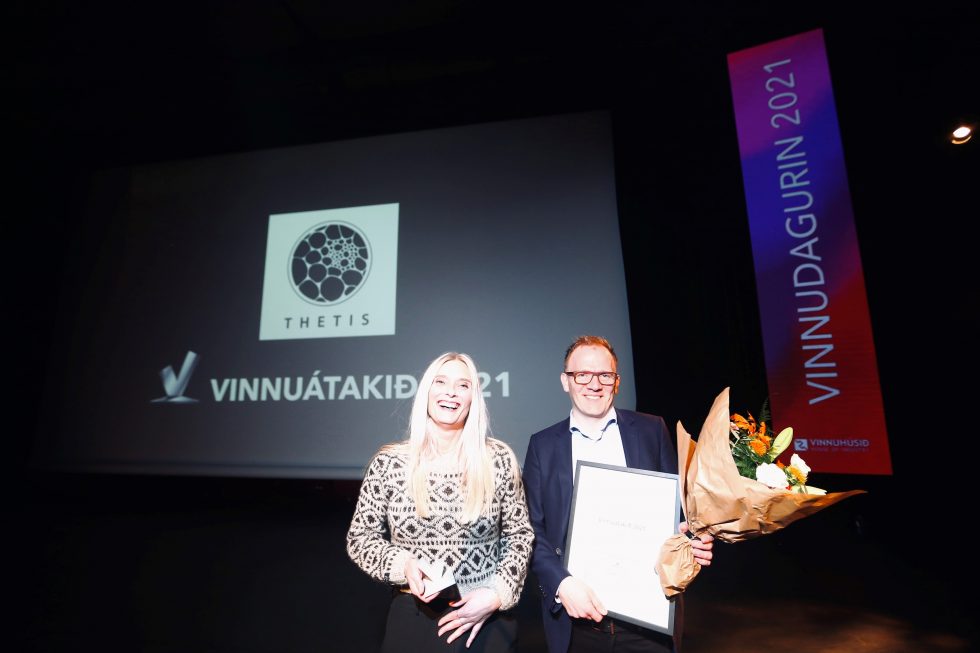 Business Initiative of the Year was announced on the annual Day of Industry, held at the Nordic House, the 1st of October. This year, Thetis received the honour. We are incredibly happy to receive this honour and wish to thank our exceptional staff, who have worked day and night during the Covid-19 pandemic, and continue to do so.

We also wish to thank our customers and partners.

Read what the panel of judges said here.

The reason for the award 2021
For the last year and a half the world has stood still. People have stayed at home, bigger events have been cancelled, and travel between countries has been reduced to a fraction of what it used to be. In-person meetings were replaced by video conferencing, and students had to get used to attending classes remotely from their own homes. Airports have resembled ghost towns, and “Closed” signs have adorned restaurant doors. For a moment there in 2020, it seemed like the world had stopped spinning.

The Faroe Islands too were hit by the pandemic, which traversed the world like a tornado. We all remember how the Prime Minister on the 12th of March announced the initial lockdowns. Large parts of the routines we were used to were abruptly halted, students were sent home, and many businesses closed their doors temporarily. This caught us unawares and many of the bright plans we had laid for the year had to be revised.

It wasn’t until 1805 when Nólsoyar Páll had one member of his ship’s crew vaccinated and subsequently transferred the vaccine from one person to the next while sailing to the Faroe Islands, that it was possible to deliver a potent vaccine to the country, where Jákup Nolsøe, Nólsoyar Páll’s brother, could start vaccinating residents on the islands.

The business now winning Business Initiative of the Year 2021 has the same name as one of ships Nólsoyar Páll once captained between Denmark and the Faroe Islands, only a few years before he came home with the vaccine. Just as Nólsoyar Páll likely couldn’t have imagine what an important role he would once play in defeating smallpox in the Faroe Islands, this business’ role in fighting the pandemic probably came as a surprise to them. They were actually founded with completely different goals.

When the pandemic hit the Faroe Islands, this business already had the scientific know-how and most of the equipment needed to conduct PCR-tests for Covid-19. They moved quickly and bought the equipment they lacked, without really knowing what their role would be and for how long it would last. It turned out to be the right decision, because ever since starting to conduct Covid-19 testing, they have administered and analysed approximately 220.000 tests.

The summer of 2020 this business was called upon to administer the testing of travellers coming to the country. The business soon thereafter took over Covid-19 testing from the National Hospital and quickly developed its own booking software. This business has done all the testing and much of the PCR-inspections of travellers to the Faroe Islands, either by air or by sea.

While the wait was on for the public authorities to develop a Covid-19 passport, this business developed a digital one themselves in a relatively short time. The business has delivered approximately 3.800 Covid-19 passports, which has greatly helped many Faroese people travelling abroad, especially those who travel for work.

This business’ achievements have also garnered interest internationally and in the latter half of 2020, they entered into a research partnership with Pfizer, with the business receiving a grant to develop vaccines. Their fast response rates have also piqued the interest of Synlab, who conduct Covid-19 testing for UEFA. The business is now an official Synlab partner.

This business has also started importing test equipment directly from suppliers, and that has meant a significant reduction in price for such equipment, not just for the business, but other similar actors in the Faroe Islands, who such equipment.

In chosing which business should receive Business Initiative of the Year 2021, the panel of judges has stressed the important societally and professionally of increased test capacity and unusual rapidity in response rate. These have played a significant role in returning us to as normal an everyday life as we have, despite it all, have had in the Faroe Islands during these strange times. Especially during the period when we were awaiting the arrival of vaccines from abroad. It has been of decisive significance for export industries that this business has been able to administer regular tests of staff, so production and export were disturbed as little as possible.

A unanimous panel of judges has decided to hand Thetis the Business Initiative of the Year 2021 for their Covid-19 testing.

Research position at Thetis laboratory We are looking for...

END_OF_DOCUMENT_TOKEN_TO_BE_REPLACED

We are looking for a quality manager at Thetis laboratory.

END_OF_DOCUMENT_TOKEN_TO_BE_REPLACED

Accreditation for the next five years

Our accreditation from DANAK has now been renewed and...